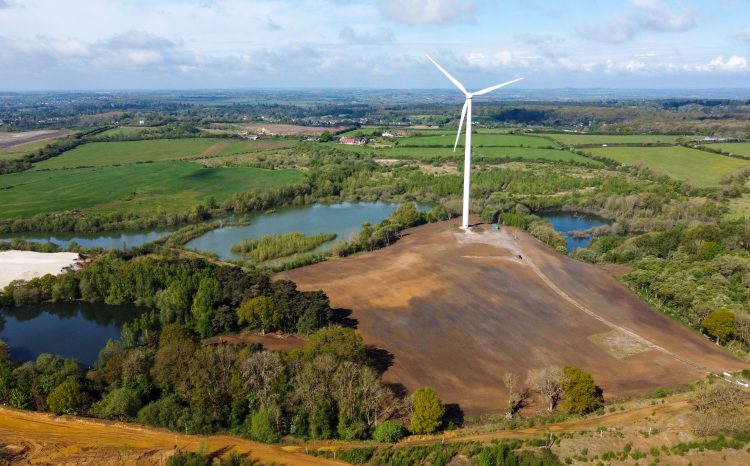 Developer Arnold White Group has submitted plans to increase the energy production capabilities of a wind turbine at its Checkley Wood site. If approved, the proposals will double renewable energy production, unlocking clean energy for years to come.

Checkley Wood is home to a wind turbine, which was approved by Central Bedfordshire Council in 2017. To complement the wind generation, particularly during the summer months when average wind speeds are lower, planning consent was awarded in 2020 for a solar array adjacent to the nearby Double Arches Quarry wind turbine. In addition, Central Bedfordshire Council has awarded planning consent to the Electric Vehicle Charging Hub which will be located next to the Checkley Wood Wind Turbine. This EV Charging Hub will comprise of a battery energy storage system, ultra-rapid electric car chargers, and an electric bus charging facility.

Since the Checkley Wood turbine was consented, the technology has been improved. This application seeks to upgrade the consented Checkley Wood Wind Turbine by increasing the rotor diameter of the turbine, alongside a 3.5m increase in tip height. The proposed increase of the diameter of the rotor will double the energy production predicted within the original planning application to 10,152,800kWh per year. It will offset a minimum of 2820 tonnes of Carbon Dioxide per year. The upgrade will increase the amount of renewable energy available to supply local homes in the area and, alongside the solar farm, the recently consented Checkley Wood Electric Vehicle Charging Hub.

Ian Foll, Managing Director of AW Energy, said: “We are delighted that our proposed upgrade to the Checkley Wood turbine means we can deliver double the amount of renewable energy at a single wind turbine by increasing the rotor diameter and adding only 3.5m to the tip height. As such, our proposals can achieve the multiple benefits of boosting renewable energy production, decarbonising the local electricity network, kickstarting the transition towards a zero carbon public transport system and giving confidence to the local public to switch to electric vehicles knowing they can recharge using locally generated renewable electricity.”